Game Mechanics or The Math behind Steel Division II.

In order to kill the enemy, you need to first see the enemy. Recon is crucial in these situations, especially if you see the enemy from far away and gain the first strike. Below are a couple of screenshots comparing the different situations. 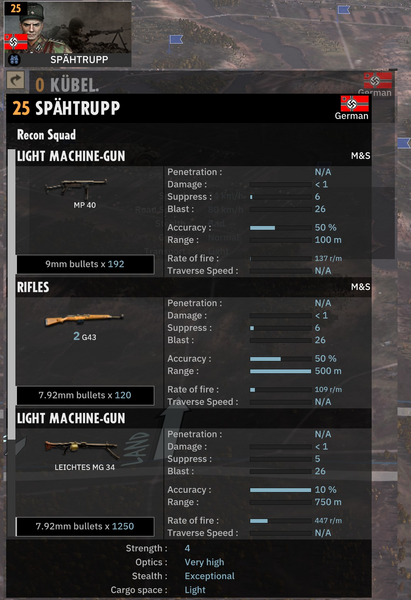 The unit information panel, showing a group of German Spahtruppen.

Steel Divisions II' accuracy system is inspired by its tabletop gaming origins and is based on rolling two 6-sided dice. (In short: 2d6)

In order to determine if a shot hits its intended target you need to follow these simple steps:

Ranging from -6 (shaken morale, firing at max weapon range) to +8 (close range, 3 stars of veterancy, third shot) or anywhere in between they can have a pretty big influence on the success of your shot.

Damage for each gun[edit | edit source]